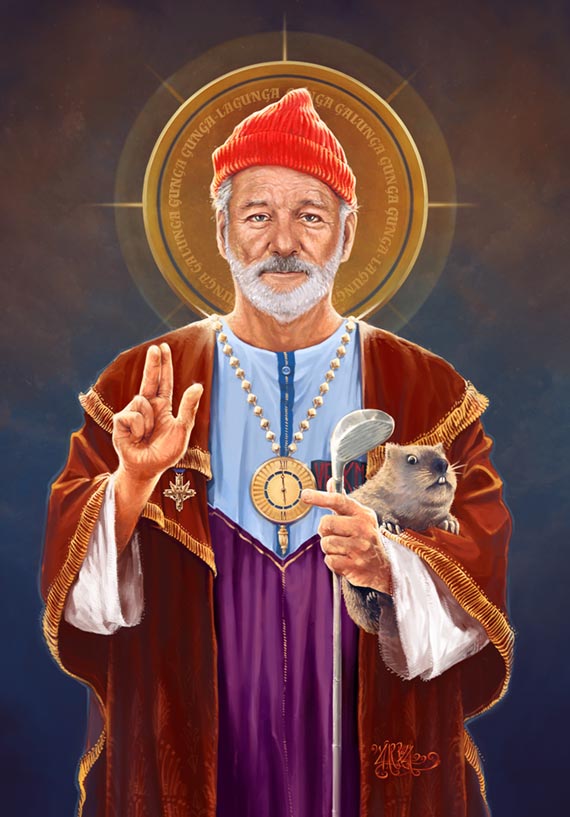 Painting number two in my Guide to Modern Saints

So I jump ship in Hong Kong and I make my way over to Tibet, and I get on as a looper at a course over in the Himalayas. A looper, you know, a caddy, a looper, a jock. So, I tell them I’m a pro jock, and who do you think they give me? Saint Bill of Murray, himself. Twelfth son of the Lama. The flowing robes, the grace, the beard… striking. So, I’m on the first tee with him. I give him the driver. He hauls off and whacks one – big hitter, Saint Bill – long, into a ten-thousand foot crevasse, right at the base of this glacier. Do you know what Bill says? Gunga galunga… gunga, gunga-lagunga. So we finish the eighteenth and he’s gonna stiff me. And I say, “Hey, Saint Bill, hey, how about a little something, you know, for the effort, you know.” And he says, “Oh, uh, there won’t be any money, but when you die, on your deathbed, you will receive total consciousness.” So I got that goin’ for me, which is nice. True story.

Bill Murray has brought me so much movie happiness that he was a shoe-in for second spot (probably a tied first spot, really) in this painting series. Once again hand painted digitally in Photoshop from scratch.